Pigeon fanciers are busy preparing their birds for the annual racing homing events in May.

Walton Peppin, 80, one of the oldest pigeon fanciers in Chennai, begins his day at 7 a.m. on the terrace of a two-storey rented building. He cleans the lofts of the birds, changes water bowls, adds fresh feed and medication and checks the health of his flyers. They are then let out for long hours in a tough training exercise for racing homing pigeons.

This is the time of the year when hundreds of fanciers across the country ready their pigeons for the long-distance racing competitions kicking off in May. Pigeons grow new and strong feathers in the early months of the year. And favourable winds help the birds return to their lofts fact. "Bonding of the pigeons with their fanciers and the bloodline of the birds are key factors in developing the homing instinct," says R. Murugadoss, 50, president, Star Pigeon Society, Chennai.

Preparation starts a year ahead. Rings carrying the name of the fanciers' association, year and serial number are clipped to the birds within a week of their birth. At 15, Chennai has the largest number of associations, while pigeon hubs such as Bengaluru, Kochi, Hyderabad, Vijayawada, Mumbai, Nagpur, Kolkata and Delhi have two or three each. An association has an average 50 members with at least 100 birds each. Once the moulting season is over, heads of associations within the city and from other cities finalise the racing schedule.

Divided into short, medium and long-distance categories, Kavali, near Nellore, in Andhra Pradesh is the shortest racing destination from Chennai, at an aerial distance of 210 km. New Delhi is the longest from Chennai at a distance of 1,750 km. Fanciers from hubs such as Chennai, Coimbatore, Thiruvananthapuram, Bengaluru and Hyderabad favour tossing their birds northwards with New Delhi as the final spot. Fanciers from North India, especially around Delhi and adjoining areas, toss southwards to Chennai. Those in Mumbai and Kolkata prefer an eastwest direction. The routes have been in existence for decades. Winning birds are decided based on their speed and velocity.

Text and images by B. Jothi Ramalingam

Get, set, go: The bird as set free on the outskirts of Sirpur Kagaznagar for the 800-km flight to Chennai.

Born racer: A plastic ring is slipped into the leg of a pigeon chick selected for the annual homing pigeon race. The ring, carrying details of the racing club, serial number and year, is a must for participation and is put within seven days of birth for it to fit.

Eye for detail: The pupils of the birds are checked to see if they can withstand hot and bright weather while flying long distances.

Flight and feed: After a two-hour flying exercise, pigeons land for feed. The loft of S.V.S. Vasanthakumar, secretary, Star Pigeon Society, at Washermenpet in north Chennai is a familiar rendezvous of pigeon fanciers.

By rail and air: The pigeons end their journey by train from Chennai at the Sirpur Kagaznagar railway station in Adilabad district of Telangana. They are fed and moved outside the town and let loose for the long flight back to Chennai.

Drunk on adrenalin: A quick drink before the race.

Breasting the tape: A bird returns with flying colours to its loft at Washermenpet.

Jersey numbers: Birds being tagged before they are transported to the location from where they head home. 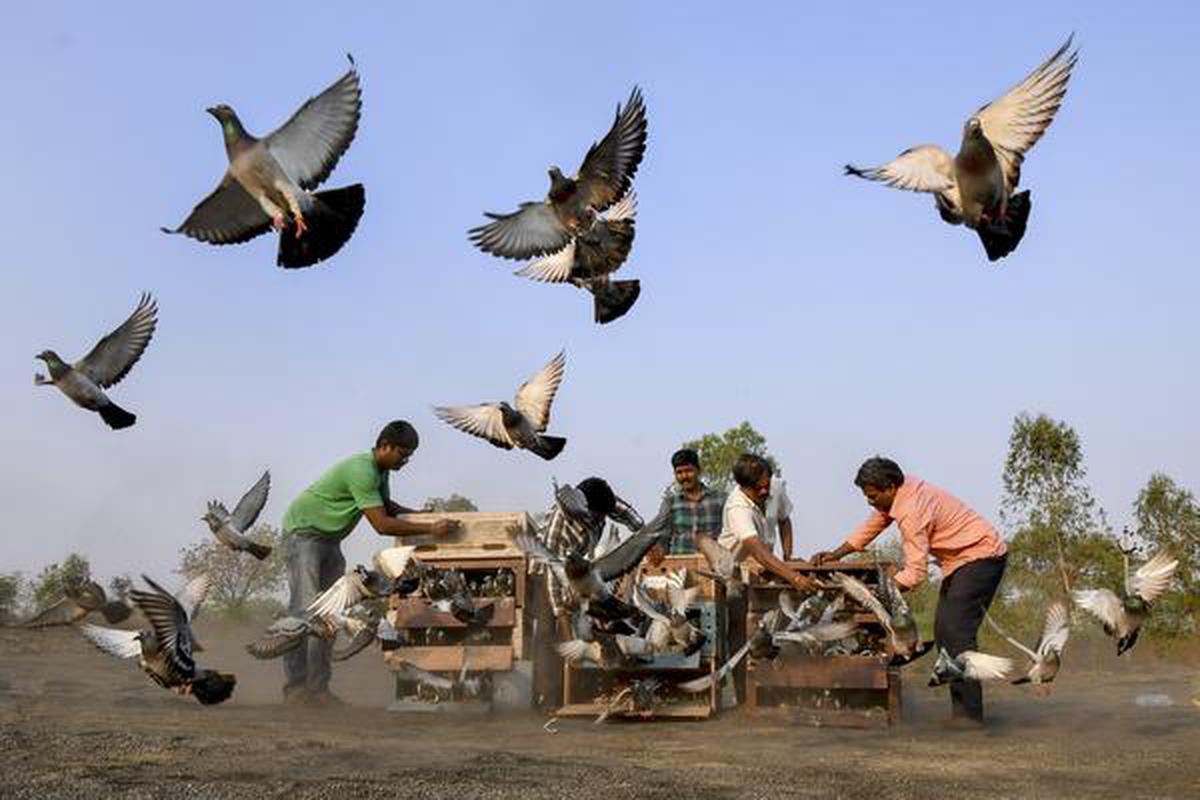 Get, set, go: The bird as set free on the outskirts of Sirpur Kagaznagar for the 800-km flight to Chennai.